Depression and the Software Developer: Smiling in the Piss Pot 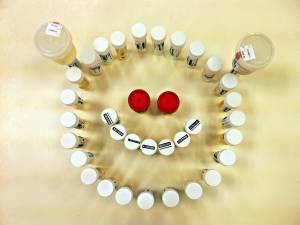 Developing software is supposed to be one of the best jobs available, because it uses creativity, and it requires professional independence. And those software jobs are out there. But some of us are not currently working one of those jobs.

In early 2009, I wrote a post entitled “7 Best Things About Being a Consulting Software Developer.” In that post, I talked about how the world does not end just because I had one really, really bad job (or a whole string of them, as the case was). I should have listened to myself. That project I talked about in that post was the NOKWID project, which I told about in the previous part of this series. (So named because No One Knew What It Did.) This is the project that threw me into a deep depression, a hopeless depression, the straw that broke this camel’s back, which no amount of positive thinking could make up for.

I was searching for an appropriate image to represent this idea, and right at the top of the Flickr search results, there it was. A smiley face made out of urine bottles.

Because now, several years later and after much focused personal development, I feel better about the experience; it impacts me as just another memory, just an experience from my past; and I can even laugh about it a little. I want to comfort you that these experiences are not the end of your life. It is okay to feel let down and put out by them, and it’s also okay to mock them. And wherever you choose to go with your life, your job does not need to control it.

Several phenomena in software development may depress you:

While you’re pursuing your plan, daydream about the good things that might happen, because those daydreams will help you find hope, and hope is the antidote to depression. Don’t rely on pie-in-the-sky daydreams to determine what will work, but do dwell on them for ideas of things you might try. Then put in place a plan to try them, knowing that they might not work in the short term. As Dan Kennedy has said, be short-term pessimistic, but long-term optimistic. To that end, fill your life with encouraging stories, and encouraging people. Listen to Dave Ramsey, because his real-life stories almost always have happy endings. And you may pick up a good business idea or job-hunt strategy in the process.

If all else fails, consider doing it just for the money. Avoid investing yourself personally in the work. I know that may sound like treason, because happy employees are intrinsically motivated and invested in the work—and in a healthy work environment, they actually are. But in many work environments, not so much, and if you find yourself in one of those, management may actually be happier if you do it just for the money, because to them it may appear like professionalism.

And remember that every job now is temporary. Long gone are the days when you were hired by a company right out of school and spent the whole of your career working there. Don’t decry this as the loss of job stability—No! It represents the advent of vibrant opportunity, adventure even. I used to let temporary software jobs get me down. But I don’t do that anymore, even if they turn out pretty bad. It’s just temporary, not the end of the world. It will pass.

This entry was posted in Uncategorized and tagged depression, stress. Bookmark the permalink.

2 Responses to "Depression and the Software Developer: Smiling in the Piss Pot"